The event, held from morning to early afternoon, was the second last in a season of events organised by Trinity College librarian Helen Shenton as an opportunity for information professionals to meet to discuss the road being travelled into the future by libraries. Trinity themselves have a 2020 strategy plan recently published and this event had much to do with how other great library institutions are dealing with the ever-changing nature of libraries and what projects are under way in their own places of work to meet this future. After a very interesting introduction by librarian Helen Shenton, the University Provost talked for a few minutes about the plan and the importance of the Trinity libraries, both in terms of the historical collections and the uniqueness of the Legal e- depository. This seemed to be a theme of the evening as Helen pointed out at the end: the need to keep both heritage and books as well as more digital content.


The first speaker was Roly Keating, the Chief Executive of the British Library. Opening with some comic remarks on what we thought would be the future library in the sixties (clean lines, Doctor Who), Roly began an enlightening talk about the two sides of the library and The British Library’s 2023 plan. He spoke about how their primary location near St Pancras station in London is a knowledge centre surrounded by organisations seeking knowledge but only became a knowledge quarter through communication. The two sides of the library line up with the geography of the location; the physical, collected, preserved lines up with the physical library itself to one side of the train station and the virtual, open, connecting and global linking to the ongoing Google build project to the other side. The library however is working towards the second side, in digital items and openness as well as taking a role in creative economy. An important aim is described as being to “make [their] intellectual heritage accessible to everyone, for research, inspiration and enjoyment”. Roly says that as the library is funded by the public it is their “birthright”. The focus of a lot of the talk was the library’s six purposes: Custodianship, Research (of all kinds), Business (support), Culture, Learning and to be available for and represent an International audience. The key projects under way include the ‘Save our Sounds’ project which plans to try and save some of the most under threat recordings in their collection, the off-site newspaper archive in Boston Spa in Yorkshire which houses ever piece of British Journalism since the 1600s, and their international print digitisation project.

Following on from Mr Keating was Mike Keller from Stanford University. He began his talk with a summarising statement saying what they were about that followed on from the two side of the library – both tradition and innovation in supporting and stimulating. Although he pointed out that their aims are mostly in line with serving their university population of students and faculty, what they do at the university is very useful in their responsibility towards “cultural patrimony and documenting [current time]”.  Mike went on to talk about how they preserve reference based information assets via LOCKSS and CLOCKSS (which he explained for those not in the know), Stanford Digital Repository which contains over 1100 collections, and they have also begun web archiving alongside other libraries and institutions. Key points he mentioned included the importance of having a data management plan when seeking funding for research, which encouraged a follow-up question from the audience after he was done speaking. Next Mike spoke about how their catalogue search worked and how library catalogues are much better for finding titles over Google Scholar. He also spoke about a very useful tool developed by a friend of his called Yewno.com. This search is based around conceptual maps that connect areas of a topic when searched which researchers can then discuss. He demonstrated this by searching ‘Ireland Easter 1916’ which drew a plain but detailed mind map of concepts around this event. He explained that 50 algorithms are used to create this. Mike also talked about a several year long project that occurred in the University which gathered 67,000 and counting maps from the collections of David Ramsey and created an exhibition centre with a stunning floor to ceiling screen. Following this he discussed the IIIF vision for the future of this and other projects, questioning if in the future of digitising these items if they could be analysed, a search could be done within the collection and results could be even compared across websites. Stanford is working with many other institutions, including UCD, to make the tools to meet this vision and make the project findable on the web. Another project they have undertaken at Stanford launched mere days ago and is entitled ‘Enchanting the Desert’ and aims to provide a interactive resource where peer-reviewed scholarly articles were available. Mike finished up with the empowering message that people are what will make the future of libraries and not necessarily just those with degrees.

The third speaker was Richard Ovenden of Bodleian Libraries in Oxford. Richard continued the theme of traditional and new library uses in his talk when comparing conserving the heritage of the historical reading room and the new needs of the library in relation to the refurbishment of the New Bodleian. He mentioned the problems with fitting these new needs within although beautiful, restricted architecture. Therefore they have preserved the older parts for the heritage but also for the historical books and manuscripts and refurbished the 1930’s building  in the centre of town to make it less “opaque” and more visible to students and the public and suitable for use as a cultural and research building. The first step in this process ,aside from changing the front of the building to be more visible with a open facade, was to move a great deal of their low-use titles to the appropriate storage facility for the work on the building. They would then be returning some of them while keeping a flexible storage facility with a smooth service should any of these texts be required. This storage facility would be staffed by an interesting mix of library staff and those with forklift licences! This reduction of books would make for more open shelf access and study space as well as exhibition space. They also worked on the general appearance of the spaces to make the tunnels more Star Trek and the space in general more open, while retaining important spaces such as reading rooms. These reading rooms would get a more fresh and well-lit look, while the stonework would be cleaned and unseen features would be made visible. All of these changes made a huge impact academically and in terms of the public. In Academic terms it opened up the space for research collaboration and international fellowship projects (which would include a ten week immersion project) as well as seminars. The updates also supported the changing nature of the library. In terms of public impact, footfalls exceeded expectation at over 880,000 visitors in 13 months, with the Oxford Literary Festival hosting 49 events in the library. Other cultural highlights include the Shakespeare’s Dead exhibition which was launched recently by Dame Maggie Smith. The library has now also hosted educational events such as coding for young people and the Big Draw of the Year. He closes on the points that the library functions completely on philanthropic donations and that marketing is key in libraries.

The final talk of the day was given by the founder of MetaLAB at Harvard, Jeffrey Schnapp. He began with an extinction chart from the past that suggested that the library as a physical form would be extinct by 2020, which he mused was simply not true. The belief at the time was that the library was “vestige of the past” and ideas along these lines of the library as only physical were naïve ideas about what the library was or will be or indeed what knowledge is. This fantasy is an either/or idea; that there can be libraries with books or the internet with knowledge. Jeffrey then suggested that the library was an experimental space and as he mentioned later on it had been since early in the 20th century as new types of technology had to be dealt with. This is where the idea of Metalab came – “a idea foundry, knowledge-design lab”.  Two things of interest are  designing a user-centric digital lab and archive (as a physical space) and designing the 21st century library, one component at a time. One project undertaken at the University was something called a Library Test Kitchen that didn’t lose the expert element but brought the conversation into an area of speculative design. This project asked questions such as ‘what would a reading room fit for text and digital library use look like’ and ‘what does the contemplatory space in this 21 century library look like’. An interesting point that Jeffrey brought up was how libraries are leading the pack in relation to collecting data in databases and catalgoues and how useful it would be if this was open. One project he was part of that looked at this used records to show how the printing of books was disseminated across Europe over the first 1000 years of printing. Something that he said towards the end really stuck with me. He claimed that having a background in cultural history made him interested in ethnology. He spoke about how the work library and its origin Biblioteca essentially means bookshelf and that although people use this to justify the extinction of the use of libraries, the idea of a book is also changeable, so why should the shelf not? He then proceeded to talk a bit about the interesting history of libraries from Alexandria and Pergumon to Napolean’s mobile library that he brought to war with him to attempts at the modern library incuding the Idea Store. His concluding points concern an important recipe – What is the library yesterday, what is the library today and to link up with the topic of the day, what is the library in the future. Jeffrey believes this is a hybrid, a multimedia space for knowledge access and activation. It will include reading rooms but will not be the ridiculous space for books mapped when the New York library was opening and the reference desk will need to be changed.
Posted by Niamh, Danaholics Anonymous at 17:41 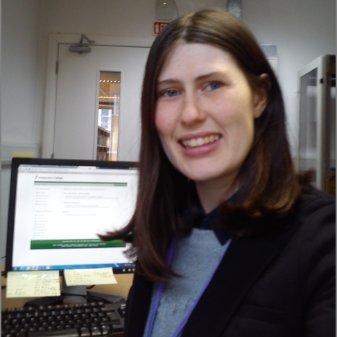 My name is Niamh Ennis and I'm a 27 year old academic librarian in the first job of my career.

I work in Dublin in a small Law, Business, Psychotherapy and ELT library.

I started this blog as part of Rudai 23 - Marketing generally takes care of our social media needs but it is important to learn more about it for the future of my career. Please disregard my profile as it was set up for my original blog in my teens.

I think i may start it up again as a library professional commenting on things as i go...